Search
My Wishlist
My Cart 0
$0.00
Categories

Fan vs. Fanless LED Headlights - Which one is better? 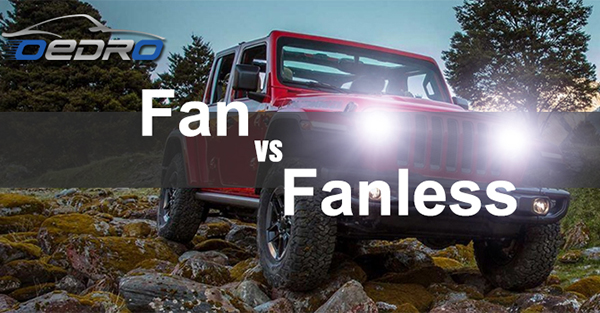 Passive cooling which makes use of heat sinks is sufficient for normal LEDs. On the other hand, designers who make high brightness and power LEDs can also consider active cooling. However, forced air cooling comes with a higher level of complexity. In this post, we will see the relationship between heat and LED performance, passive and active cooling, the pros and cons of headlights equipped with fans, and the pros and cons of headlights without fans.

Heat and Performance. How is the LED affected?

The amount of heat generated by LED headlights can have a considerable impact on its performance and longevity. There are three important reasons to keep the LED headlights as cool as possible. These reasons are as follows.

2. When the LED is operated with its maximum rated junction temperature, it can initiate a variety of different stress mechanisms which in turn will reduce the operating life or longevity of your vehicle's LED headlight.

In addition, when the heat within your vehicle is properly managed, it has several benefits. When the heat is effectively dissipated, it can reduce the total cost of the LED system by avoiding frequent replacement. It also allows the LEDs to operate at an optimal power level, which reduces the number of LEDs required within your vehicle to achieve industry-specified brightness.

The main advantage of the passive cooling mechanism lies in the low financial cost and better energy efficiency. This makes it an astute design choice for designers when it comes to heat management for LED headlights. It achieves high levels of heat dissipation by using a heat sink that maximizes the convection and radiation heat transfer modes. Passive cooling uses natural sources like wind to absorb or dissipate heat. This in return performs proper cooling of LED headlights and allows it to be maintained at optimal operating temperatures.

1. The external source, in this case, the fan which is installed within the assembly of headlights performs quick heat elimination from the LED.

2. If you select a slim fan for your vehicle's LED cooling, it does not require much space and fits in properly within the headlight assembly.

3. During the convection, the rate of fluid flow is increased which increases the rate at which heat is removed.

1. When using an external source like a fan for cooling, it can consume additional power and also increase the overall maintenance cost.

2. Fans can create a lot of noise within the assembly during their process to cool down the LED headlights.

3. In cases where the headlight assembly is not sealed properly, fans can attract a lot of dust and gather along, which in turn affects the performance of the headlights.

Fanless LEDs are LED which uses a passive cooling mechanism and does not involve any external source for cooling the LED headlights. Fanless LED headlights come along with a heat sink which is essential for a high level of heat dissipation. OEDRO LED headlights are Fanless and the following are the pros and cons of it.

3. It does not require any energy source to run and also does not attracts dust as compared to Fan LED.

1. Fanless LED headlights that come along with heat sinks require continuous monitoring from time to time.

2. The cooling of the LED is not as fast as compared to the Fan LED headlights, because of its dependence on natural elements like the wind.

Which one is better for your vehicle?

Vehicles with LED headlights are becoming popular day by day. People with vintage and old cars are changing their halogen headlights with LED headlights for better and optimal lighting solutions. However, to make the selection between fans and Fanless LED's can sometimes be a tedious task if you don't know their individual pros and cons. And the wrong selection of products can turn out to be quite expensive for you. As discussed above, Fan LED headlights tend to be noisy and require extra power and energy to dissipate heat. Whereas, Fanless LED headlights, do not create any noise and also don't require any additional energy for their operations. In addition to the noise and energy, Fan LED attracts a lot of dust if they are not sealed and assembled properly. This is not the case with Fanless LED's.

Also, the maintenance and operating cost for Fan LED can be at a higher end. And they are known to reduce the lifespan of your vehicle's headlights because of the dust they collect. All these aspects when compared with Fanless LED's, makes OEDRO Fanless LED headlights a better option for you if you happen to own a Jeep Wrangler because of the low cost and better energy-efficient solution that we provide. Not only it is cost-effective, but at the same time, it increases the longevity of your vehicle's LED headlights. Making it a better option for your Wrangler lighting requirement.

For further ways to select LED headlights of good quality, please refer to our previous blog: How to tell high performance LED headlights.

Deciding which accessories to choose for your vehicle can be a difficult job. It becomes even tougher if you don't have the necessary details alongside you to make the choice. Making an inappropriate choice will not only result in extra expenses but also it won't be suitable for the operation of your vehicle. OEDRO’s guide to the fan and fanless headlights provide you all the details necessary to understand the importance of heat on LED's performance and what you must do in order to achieve optimal lighting solution for your vehicle. Depending on the various factors when it comes to deciding on the Fan and Fanless version of headlights, Oedro headlights perfectly suits your Wrangler every need. It is a cost-effective solution that provides superior lighting solution and also increases the lifespan of your vehicle's headlights. The Oedro Fanless headlights are easy to install and comes with a two year warranty period. And if you have read our guide, then for sure you will make an informed and right decision for your vehicles lighting requirement.